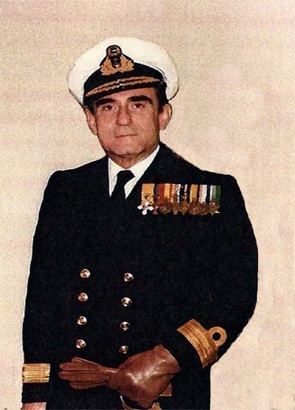 Christos was born in Athens, Greece in 1922.  He grew up in Chania, Crete and in 1939 entered the Naval Academy of Greece.  On April 7, 1941, the day after the heavy bombardment of Piraeus by the Germans, he and all the other cadets received an open-ended leave of absence from the Academy. He was a second-year cadet.

A few days later he, along with his sixteen-year-old brother Demetris (the future Rear Admiral) escaped to Turkey and from there to the Middle East and on to Alexandria, where he continued his studies in the Greek Naval-Academy-in-exile.

After his graduation in 1943 as a commissioned Ensign, he served on three destroyers participating in Allied combat operations in the North Atlantic, the Mediterranean, the invasion of Sicily, the Dodecanese campaign and the operations in the Indian Ocean. He also participated in the naval operations during the Greek Civil War.

He commanded three surface vessels and served as Aide-de-Camp to the Chief of Naval Operations and in several Chief-of-Staff positions including Director of the General Naval Staff / A1 ( ΓΕΝ/A1). 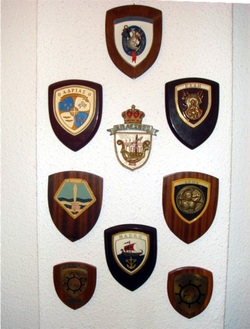 Christos' crests
In 1958 he resigned his commission to pursue graduate studies in Electrical Engineering in the United States, where he received his M.S. EE degree, and at the British School of Electronic Communications receiving his E. C. Diploma.

In 1970 he was black-listed by the Colonels’ Junta for his anti-Junta activities and for co-signing a declaration along with his brother Demetis advocating for the return to Democracy and the parliamentary system.  In 1974, after the collapse of the Junta, he was recalled to active service where he served as Director of the General Command of Naval Communications and Chief of the Naval General Staff of Eastern Mediterranean. 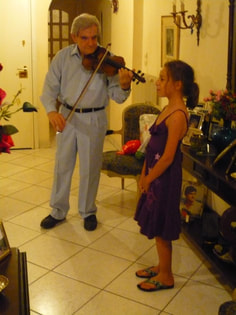 He was a violin enthusiast, if not a virtuoso. His repertoire ranged from opera and classical music to popular songs and  Cretan  "Mandinades"  (limericks accompanied by a violin, Lyra).﻿ He particularly enjoyed the duets with his granddaughter Maria, an "aspiring" 13-year old opera singer!

He was a lifetime member of the Hellenic Maritime Museum and had served as the "Commodore" for many national and international regattas and sailing events. He was a sought-after sailboat skipper with many trophies to his name. He remained active in the sail-racing circuit until 2008.

And, yes, I thoroughly liked Brahm's Rain Sonata he played for me before dinner, but I enjoyed the "Mandinades" he played afterward!