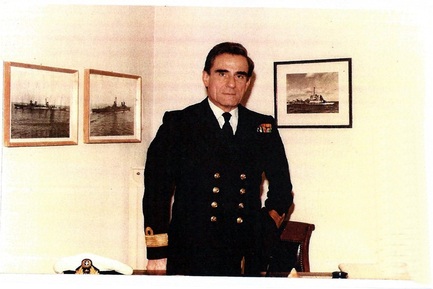 Cdre Christos E. Papasifakis
Before I begin my story of ADRIAS, I should digress to give you an idea of the conditions and the spirit of the period.

Although our country has been fighting invaders since the dawn of civilization, the Second World War was the hardest, longest, and the most destructive, in men and ships, of all wars in which Greece had been engaged since the war of Independence from the Ottoman Empire in 1821.

However, the contributions of our Navy and Merchant Marine during WW II, fighting on the side of the Allies, were significant and extremely important. Our Navy's presence in the Middle East was a big morale boost for our Nation which was under German Occupation and a tremendous asset to the British Navy.  Incidentally, the Navy was the only one of all the branches of the Greek Armed forces that continued, without interruption, carrying out Greece’s struggle toward the Liberation.

Our ships participated in tough and very dangerous operations the likes of which had not encountered before. Suffice it to say that in the Dodecanese Campaign[1] about one-third of the ships that participated did not return to their base, either they were sunk or were put out of commission for a long time.[2]

It was normal for our ships to travel for 25-30 days in bad weather and under harsh war conditions.  Our ships participated in operations in the Mediterranean, the North and South Atlantic, the Red Sea, the Indian Ocean, and the Gulf of Bengal.

Navy personnel being cut-off from the homeland did not know whether their families had survived the German invasion or how they were faring during the Occupation. Nevertheless, they went on fighting for three and a half years with high and truly admirable morale. Also, the Greeks of the Diaspora who were recruited into our Navy did not fall short in enthusiasm, valor, and sacrifice fighting side-by-side with their native-Greek comrades-in-arms.

Those were turbulent years for all, for the civilians and for those in uniform alike. Nevertheless, with a few exceptions, officers and crews upheld the Navy's noble tradition of valor, duty, and honor.

______________________________
[1] The Dodecanese island group lies in the south-eastern Aegean Sea, and had been under Italian occupation since the Italo-Turkish War. The island of Leros, in particular, with its excellent deep-water port of Lakki (Portolago), had been transformed into a heavily fortified aeronautical base, "the Corregidor of the Mediterranean", as Mussolini called it.  With the defeat of Axis forces in North Africa in the spring of 1943, Winston Churchill wanted the islands to be captured, thus depriving the Axis of forward bases in the Mediterranean and also apply pressure on neutral Turkey to join the war. The operation was criticized by many at the time as another useless Gallipoli-like disaster and laid the blame at Churchill's door.
[2] Toumbas, "Enemy in Sight",  p. 351