If you have any questions or comments please let me know.  Most of the material is from my cousin Christos' files and the conversations I had with him during my 2013 visit to Greece. However, I have included some commentary to enhance Christos' narrations and a few pictures from other sources making sure,  wherever possible, to acknowledge them or to obtain permission from what I believed to be the appropriate source. Therefore, if there is something which is incorrectly acknowledged or I have not acknowledged or received permission to use, please contact me and I will make the appropriate corrections. 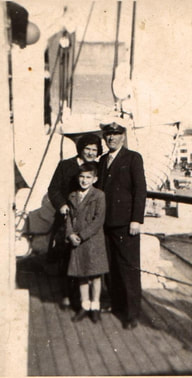 Also, bear in mind that I am not a Navy man and have no military experience except that as a youngster I frequently traveled, during school vacations, with my father who was a sea captain. And although as young boys, my two older brothers and I, were dreaming of following in his footsteps and someday command our own ships and see the world, to say that he discouraged us from going to sea is an understatement, he forbade us!

Instead, he sent us to universities abroad to become  Electrical  Engineers, thus we saw the world in a different way; working for major International companies around the globe—from Athens to California, and from Germany to South Africa. God bless his soul.

In this picture, Mom and I joined Dad for one of those magical trips. Without a doubt my brothers and I were three of the luckiest children in the world for having Vasilis and Myrsini as parents. We were not rich, but I can't think of one thing my brothers and I lacked growing up—from toys to summer vacations and from private schools to studies abroad. However, we were rich in another way, we were blessed with five loving cousins and their parents, our dear aunts and uncles.

In addition, there was our beloved aunt Sofia, my father's older by 15 years sister. She did not have children of her own. She would "babysit" us when our mother would go travel  with my father. You can not even begin to imagine the mayhem and mischief this old lady had to endure taking care of three preteen young boys and no parental authority present. Her only disciplinary tool was threatening us with "wait until your parents come home!" But bless her soul, when my parents would return, she had nothing but praise for her three "angels !" (ηταν aγγελουδια!!!). Rest in peace dear auntie!