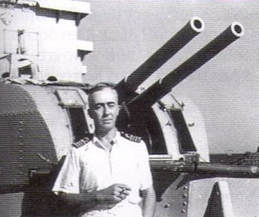 It was a sunny morning on September  17, 1943 when my friend and  Academy classmate K. Themelis and I, both officers for two-and-a-half-months by now,  arrived  in Alexandria after a rather comfortable five-hour train ride from Port Said to report for duty on ADRIAS.[1]

ADRIAS  had just arrived in Alexandria after participating in the invasion of Sicily and the other operations in the central  Mediterranean. I shaded my eyes and scanned her from stern to bow making a mental note of her gun turrets, the bridge, and her razor sharp prow. She had emerged from the British Swan Hunter ship builders a mere year-and-a-half ago with sleek lines and her navy-gray paint on her superstructure was still gleaming. She was a beauty.

Her skipper was Commander Toumbas whom my brother and I had already met on AETOS [as the DURANTE 7], on our way to Alexandria, in 1941.

Themelis  and I,  dressed in our best Ensign's uniform, sword and all, were driven from the train station to ADRIAS with plenty of time to kill before our 11:00 a.m. meeting with the CO. We walked about the pier toward the bollard where the prow line was tied off, looking at a sailor in a Bosun's chair patching up the paint, drawing inquisitive looks from the passerby and those aboard. At 10:45, we climbed the ladder to board our ship. Permission to come aboard, we said at the base of the ladder. "Aye, sirs," the guard allowed. It was a long climb up to the quarterdeck as we heaved ourselves in-board to the guard's calls and the sharp movement of hands as salutes were exchanged.

"Ensign Papasifakis, Ensign Themelis coming aboard  to report to the Captain," we said to the duty officer.  After a cursory inspection of our papers, in total seriousness, "he's waiting for you, sirs," he said pointing a finger toward the stairs leading to the upper deck as he summoned a smartly-uniformed sailor, probably Toumbas' orderly, to escort us. "If you will come this way, sirs," the escort said, motioning toward the prow, and the Captain's cabin.

He knocked on the door and a familiar voice to both of us behind the door replied, "Enter!" The door squeaked open, "Ensign Papasifakis, Ensign Themelis, sir, the escort loudly announced with a stamp of his boots and a smart salute.  We stepped in, stood in attention and saluted:

"Ensign Papasifakis, reporting for duty, sir! "
"Ensign Themelis, reporting for duty, sir!"
​
Toumbas, an "Officer and a Gentleman" that he was, said "Gentlemen, at ease," slowly rising from the chair behind his desk to return our salute, still leafing through our files. "Aah," he said, still looking at the papers, "a long day, was it not?" Yes sir, we replied still standing at semi-attention. And as he was lowering himself back on his chair he said with pleasure, "sit you down, gentlemen, sit you down." Then he began explaining the ship's mission and his expectations and letting us know that he had made a special request to get us—possibly because he knew me from AETOS  and because Themelis was his nephew[1].

His tone was calm and measured explaining his objectives and what he was expecting from his offices and the enlisted men. We listened carefully to everything he said and by the time he finished there was no doubt in our minds that he expected operational readiness at all times.

"One last thing," Toumbas said before dismissing us. "Yes, sir," we said in unison. "All men here are seasoned warriors, you will have to earn their respect." "Yes, sir, we know what is required of us, we won't let the team down," we said as we assumed the "attention" stand for saluting before leaving.
"At ease," said Toumbas as he stood up and stepped around from behind his desk, signaling that the meeting was done. He came close and firmly gripped our hand and shook it. "That's the spirit, gentlemen. Welcome aboard."
And as we turn to leave, he said, "uh, I forgot," we froze in our tracks managing to say a faint "yes, sir."  "Quarters is at 07:00 immediately followed by morning muster, carry on." 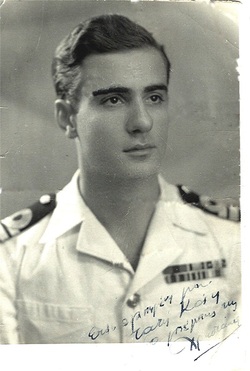 Christos
As luck would have it, Toumbas arbitrarily assigned Themelis as Aide to the Navigation Officer and me as Aide to the Artillery Officer. That meant during battle Themelis would be the gun-captain of the forecastle turret and me of the aft turret—a routine assignment whose consequences nobody could have foreseen and which would have profound implications for the lives of both of us.  And if that was not enough of all the games life plays, the first man I saw as I was climbing ADRIAS'  ladder was Gunnery Quartermaster Nicholas Androulakis, a childhood friend!

As I continued climbing up a thought crossed my mind: "What other surprises does this ship has in store for me?"  Of course, at that moment, I could not even begin to imagine how the name "ADRIAS" was to be linked with life-long memories of blood, sweat, and tears, sleepless nights, pride, horror, and glory.

Quartermaster Androulakis and I were playmates before the war in Agios Nikolas, Crete.  He was a couple of years older than me working for his father who had a carpentry shop. His family had a boat and he would frequently take me fishing or sailing. No doubt he was the one who gave me my first lessons in my lifelong love for sailing [2]. At that time my father, an army colonel, was the Director of the Draft Board.  So when the time came for Androulakis to be drafted, he asked me to "talk" to my father so he would be drafted in the navy. Needless to say that his wish was fulfilled.

You can't imagine my surprise seeing him on ADRIAS after so many years. We had lost track of each other and the possibility that I would see him in the Navy never had crossed my mind. He had become a good sailor and an asset to his men and to his captain. Toumbas respected him very much. But as luck would have it, I, being instrumental in getting him into the Navy, sadly, would also be the one to bury him.

The next day ADRIAS and five other destroyers—Hayward, Beaufort, Hursley, Croome, and Pindos--sailed for Taranto escorting six troop carriers full of soldiers and supplies for the reinforcement of the advancing Allies in Italy.  We arrived on the 24th and took on about twenty Greek hostages who had been liberated by the Allies.  Among them were some Generals and other high-ranking Army officers. They stayed on board for eleven days  while we were participating in various missions around the Mediterranean.

Our 22nd flotilla was escorting a convoy to Augusta and from there to Algiers and to Malta.  On October 1, 1943, we left Malta escorting ships to Port Said and from there we left, at flank speed, for Alexandria. Upon our return to Alexandria on October 4th, we learned about the loss of our legendary destroyer "Basilissa Olga" in Lakki, the port of Leros. The whole ship was in mourning, we all had friends and acquaintances in that glorious ship of Lieutenant Commander G. Blessas. Among them her executive officer, Lieutenant M. Grigoropoulos, who was another of Toumba's nephews.

A few days before, we had lost the brave Commander B. Laskos and his submarine, Katsonis. Everyone on ADRIAS was sad. But after four years of war, we were all fully aware that during wars ships sink and men die. We tried to live one day at a time for "tomorrow" was promised to no one! 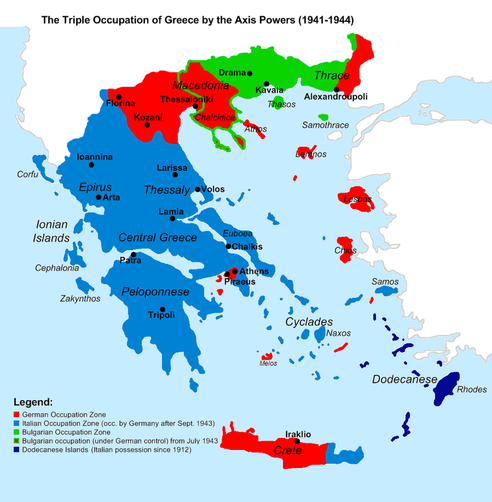 Map of occupied Greece; Wikipedia
Motivated by a desire to counter German influence in Rumania,  Mussolini invaded Greece on October 28, 1940,  from Albania. However, after the Italians suffered a humiliating defeat by the Greek Army, the Germans stepped in on April 6, 1941. That resulted in a triple occupation of Greece.

On September 3, 1943 just before Italy's  surrender, the celebrated Dodecanese
campaign[3] began. It was a foolish decision shoved down the throat of the Admirals by the Generals who usually  have no idea of the complexity of naval operations. A decision that has been severely criticized ever since[4].

Or, to put it in more official terms, an ill-conceived attempt by the Allays to capture the Italian-held Dodecanese islands, following the surrender of Italy, so they could use them as bases against the German-controlled Balkans and put pressure on neutral Turkey to join the war.